Kenya Airways has installed a new revenue management solution which will enable the airline to optimize ticket sales.

KQ, as the national carrier is known by its international code, says one of the biggest challenges for airlines in revenue management is striking a balance between high-priced late bookings and low-priced early bookings.
The new system, by travel technology firm Amadeus, will enable the company to maximise ticket prices across various booking times while remaining competitive.
Travellers seeking bargains often compare ticket prices from different airlines.
“As the market dynamics and our customer behavioural patterns change, it is important to continue innovating and improving processes to meet those changes,” Sebastian Mikosz, KQ’s chief executive said in a statement.

Kenyans and tourists can now take virtual tours of Kenya’s national parks after tech giant Google launched its street view feature on maps for 21 national parks and one conservancy.

Tourism and Wildlife Cabinet Secretary Najib Balala said the virtual maps will play a great role in marketing the country as a viable tourist destination around the world, and boost visitor numbers to the country.

The virtual map captures 360-degree ground-level imagery, enabling users remotely explore landmarks and park features, which will work as a marketing tool for the destinations.

Visitors are increasingly going online to scout for potential destinations, hence the advantage of the preview offered by the virtual imagery.

‘Lobsters and octopuses are back’: the Kenyan women leading a reef revival 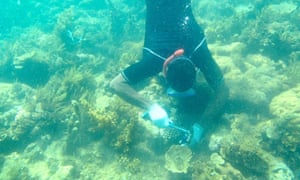 Three years ago, the coral reef along the Kenyan coastline was almost totally destroyed in some areas. Rising surface sea temperatures had triggered devastating bleaching episodes for the fourth time in less than two decades, and with the whitening of coral came a dwindling of marine life. Overfishing only exacerbated the problem.

For coastal communities dependent on the sea for their livelihoods, the degradation of the coral reef and its effect on the marine ecosystem threatened to overturn an entire way of life. In some areas surveyed by the Kenya Marine and Fisheries Research Institute (KMFRI), as much as 60-90% of coral was destroyed.

A fightback was needed and so the institute began working with local communities to rehabilitate degraded coral reefs along the country’s coastline. Among the areas targeted was Wasini Island, a tiny strip of land off Kenya’s south-east coast. The results have been startling.